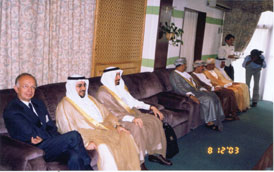 December 2003. The event was held in Novotel Seeb Hotel and Oman International Exhibition Centre, and was hosted by the Ministry of Housing, Electricity and Water of the Sultanate of Oman

The conference was divided into panel discussions and three parallel technical sessions. There were 14 panel session speakers, with a moderator for each session, and 25 technical speakers, with a chairman and co-chairman for each session. This was in addition to the opening ceremony, which featured HE Sheikh Suhail bin Mustahail Shamas, Minister of Housing, Electricity and Water of Oman, Mr. Jean Kowal, Secretary General of Cigre and Prof. Anwar Hassan Mufti, Chairman of GCC CIGRE.

The panel sessions fell under the following headings:

-Electricity industry restructuring and the role of regulation

-The benefits of integrated national grids and the future GCC gird

-The financial and legal framework for private investment

The technical sessions were divided into 3 streams:

The technical presentations were given out in a printed book of papers,. The conference proceedings together with a CD loaded with power-point presentations of all speakers, both technical and panel, along with the biographies of all speakers and GCC CIGRE’s recent publications were given out in a conference bag featuring the event logo. The bag also included other materials from the Ministry of Housing Electricity & Water and the organizing company.

At the end of the conference, there was a technical visit to the Barka Power Plant. This was very popular and was extremely interesting.

The exhibition was held at the Oman International Exhibition Centre, adjacent to the conference venue and was held over three days, from 8 – 10 December. The event attracted 78 exhibitors, including national pavilions from the UK, Germany, Russia, China and Iran. Visitor numbers topped 1300, and were of a high quality as they were trade only, from 30 countries around the world.

The exhibition catalogue was a full colour, 50 – page, bi-lingual glossy brochure, including introductions from the Ministry, the chairman of GCC CIGRE and the organisers. It included information on all exhibitors, as well as useful information, articles on the power sector and advertisements.

GCC CIGRE is planning to organize GCC POWER 2005 in the next year.

GCC Power 2014 Closes in Bahrain, Recommending to Emerge GCC Electricity market with the A ....